What is Etchells Australian Championship 2020?

Two races in good wind with improving skies closed out the 2020 Etchells Australian Championship from the Royal Brighton Yacht Club. Certainly the shifts were there for the astute crews to use, and a sailing lesson was certainly delivered by the great John Bertrand, with Noel Drennan and Jake Lilley as crew, when on the ...

Certainly the shifts were there for the astute crews to use, and a sailing lesson was certainly delivered by the great John Bertrand, with Noel Drennan and Jake Lilley as crew, when on the last work to windward of the day they nearly came away with the win. As always, it is a delight to watch this crew at work. 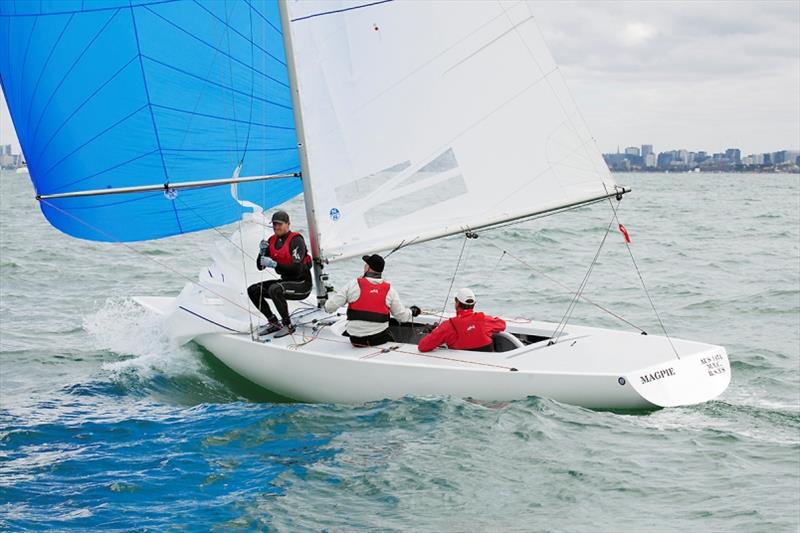 The full roster of seven races were completed in the typically for Melbourne whole range of conditions. This year it was all even more eerie when the smoke from the bushfires came in, went, and then returned once more. Many thanks to all those who have donated through the page, and you can still do so now if you are so inclined, all the way up to the end of the Victorian State Championship 6-8 March, 2020. Presently we are at $6500.

Naturally with sheep stations on offer the last day was always going to have multiple starts before we eventually got Race Six under way under Black. What was even more interesting was how far back of the line the fleet racked up, relative to the previous three attempts where this seemed to be done on the line proper. 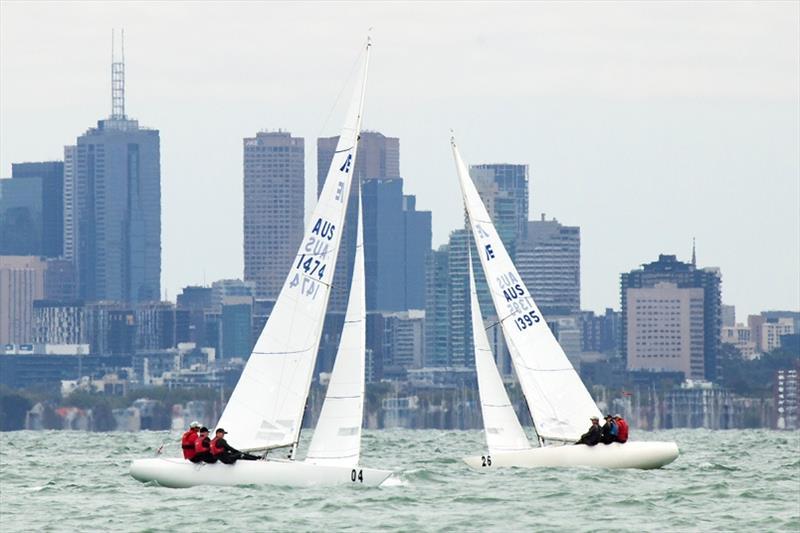 Apart from the many interesting things that occurred what was of great interest was how Fumanchu (Mark Roberts; Jake Newman, and Matt Johnston) managed to complete it with the rig still standing, having nursed a lower shroud that had departed from its pin in the chainplate. Evidently, the repairs and included motivation must have worked, for they came out to win the final race from gun to gun in a wonderful show of determination, perseverance, and seamanship.

Mark Roberts said from the quay, “We were in second place coming in to the weather mark for the second time and looking quite good, when the starboard lower let go. So Matty had to hike off the lower for the next three tacks. Finishing with it all still standing was a real bonus, certainly when you look at the result of the second race. We could not cover John Bertrand from where we were on the track, so had they have had even more of lift then they deserve to win it.”

“We finish in fourth place overall, after a really fun regatta. Great result for Magpie, they really have that boat smoking, and the same for Havoc. Triad2020’s speed at times was simply blistering.” 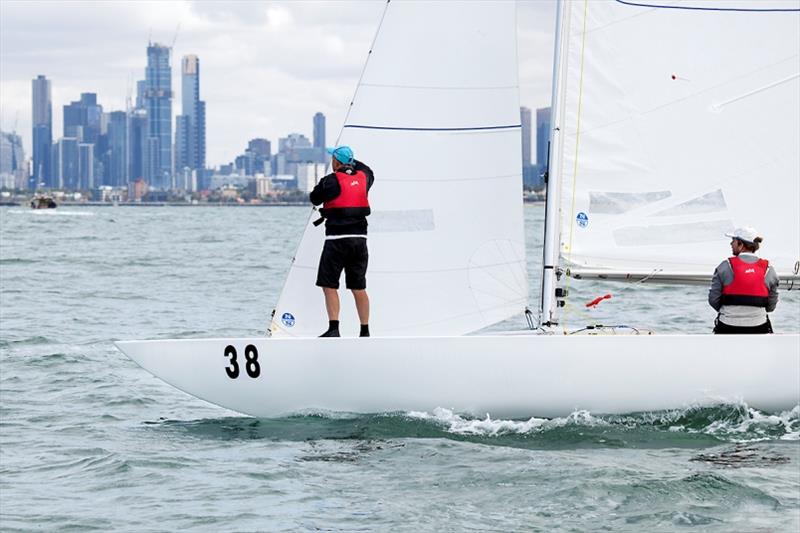 Kirwan Robb is the Skipper of Triad (AUS 1383) that finished in sixth place overall. They are the leading Corinthian boat, which is crewed by Rodney Muller, Brett Taylor and Josh Garner. Robb would say once back ashore, “We are pretty happy, and carried it all on from Brisbane when we got the boat, and then Geelong in March. We have not had much sailing in Melbourne, as a lot of it has been blown out. So we have probably only had a couple of weekends to get sorted. Our first race yielded a 26th, so we are certainly happy that this gets discarded in the final result. We almost felt it was all over at that point.”

As for their continued involvement with young sailors on board Robb said, “I think it is because of the big boat (Ikon) where there is always a lot of family and kids, and we are trying to encourage them into the sport. Hugo grew too much, so now it is Josh’s turn.” 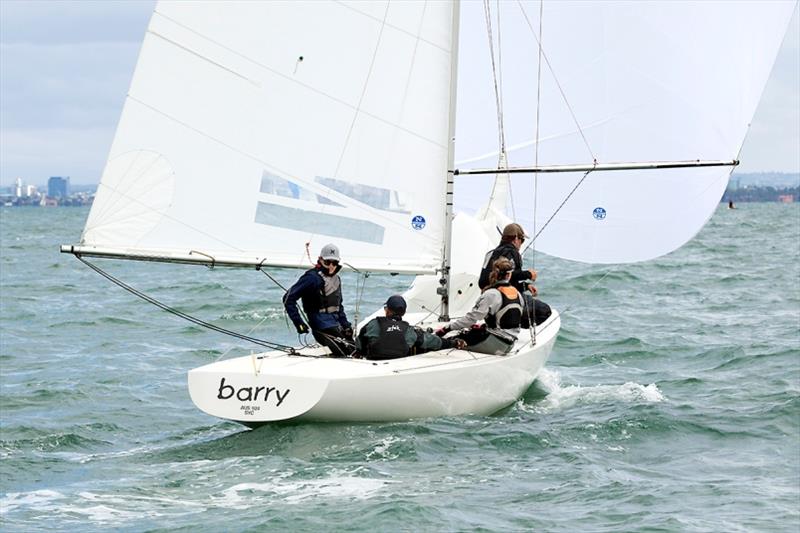 Josh Garner, the 11-year-old cadet sailor that the Triad crew have taken under their wing said, “I liked winning the Corinthian Trophy. It felt good – it’s pretty cool. I liked working hard on board and the guys are pretty funny, as well. I will do more in the Etchells.”

Winning Race Six was the third time in the series that Magpie, (Graeme Taylor [GT], James Mayo, and Tom Slingsby) had recorded the best possible result this regatta. Not quite the same as their five in a row in Texas last year, but magnificent by any measure. They elected to win the race to the crane by not competing in the final race of the day, and using the DNC as their drop. This is a benefit of having one second and two fourth places as your other results. 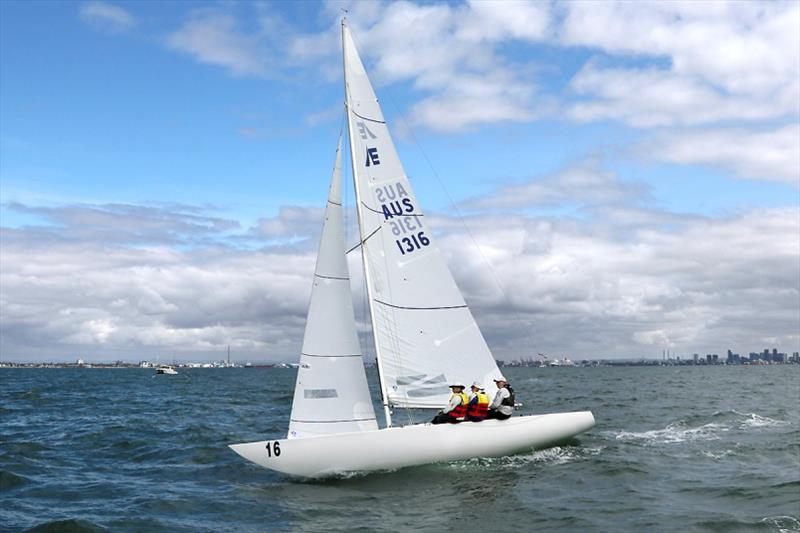 The Good, The Bad, and The Ugly – kind of sums up the weather… – 2020 Etchells Australian Championship, final day – photo © John Curnow

Asked what is it about Etchells, given his long standing with the class, and all he does elsewhere in the world of racing, Tom Slingsby said, “For me it is the class I grew up with. Even though I was a Laser sailor, my dad (the great gentleman David Slingsby) was a Gosford Sailing Club Etchells sailor since I can remember, so that is probably 1988 or thereabouts. When I was growing up in junior classes, like Sabots and Lasers, the keelboat I would always sail was the Etchells. I would go with dad in the twilight races, and then we would do the big events when they came to Gosford.”

“After that, when I got a bit better, I was allowed to take the boat to Sydney. So for me I think my first Australian Championship was in about 2004 or 2005. It is a class I love and I have grown up with them, and always come back, every chance I get. I started off steering, and now I am on the bow, so I am not sure how that has worked out.” 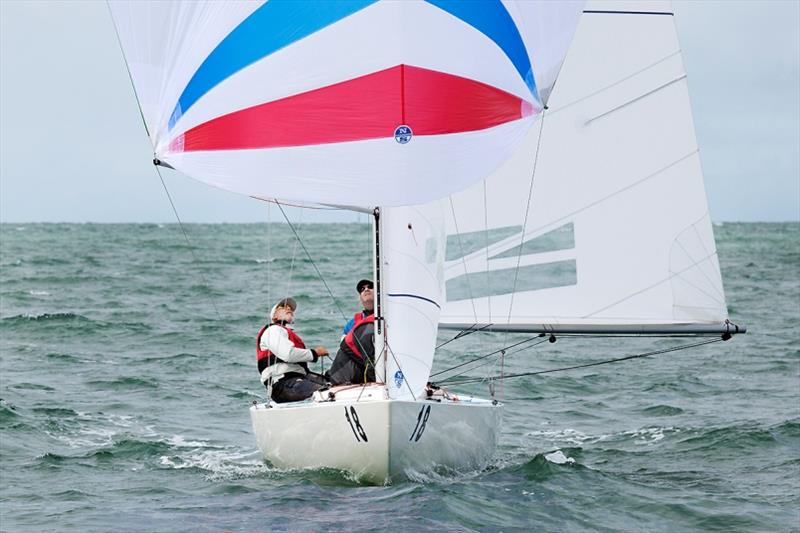 It is wonderful that Tom does not only show up, but goes racing and demonstrates to all just how good a sailor he really is. Now with another national title to their credit, you quickly wonder how it goes into the plan to win the World Championship in Perth this November. “I am feeling quite good at the moment. Last year was a bit frustrating, because I had not won a world title in a few years (Tom won the Moth worlds just recently BTW). We had set our sights on the worlds in Corpus Christi, and nearly got there (just one point adrift). So for us we do want to win it, and we get on well with the Havoc crew, but there is also the desire to come out on top in our friendly competition.” 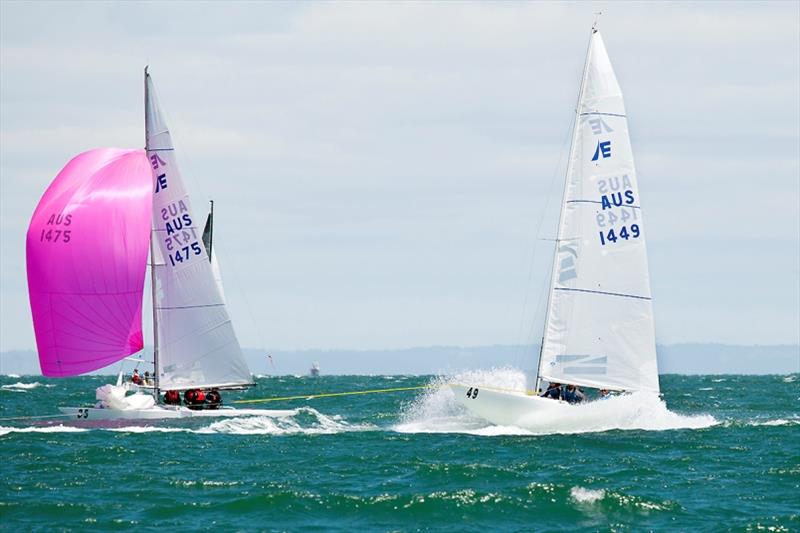 “We share ideas and keep pushing each other, but for sure I want to get an Etchells world title once again.” (Tom won in 2010 with John Bertrand [JB] and Andrew Palfrey). Of course all Australians want Tom and the crew to win another SailGP title, to which Slingsby just say, “That would be nice.”

“At the moment the way the calendar looks I may not be able to go to the Moth Worlds, so the Etchells may be the only other class I can make happen. I am very keen to be there when GT gets his Maiden win. I’ll be over the moon if I can repeat the performance with GT, as we did with JB.” 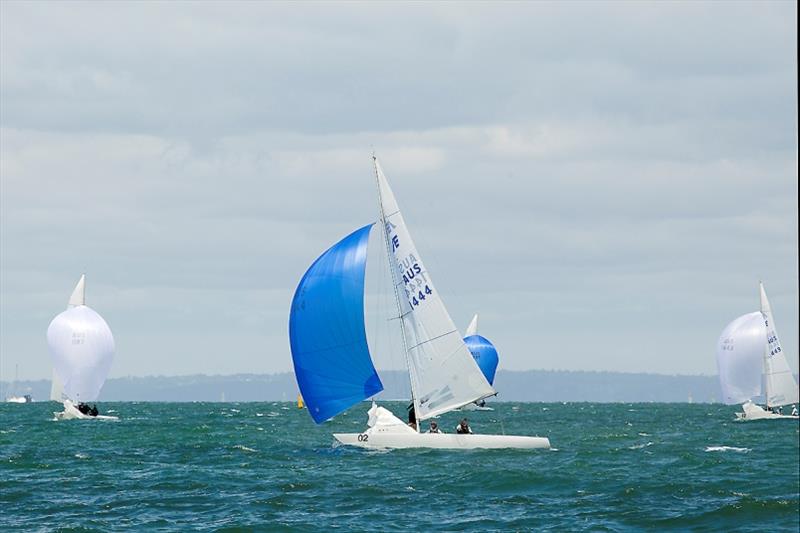 Many thanks to all the volunteers and officials from the Royal Brighton Yacht Club who are making the racing possible. See the Etchells Australian Association Facebook page, and the event website for more details. 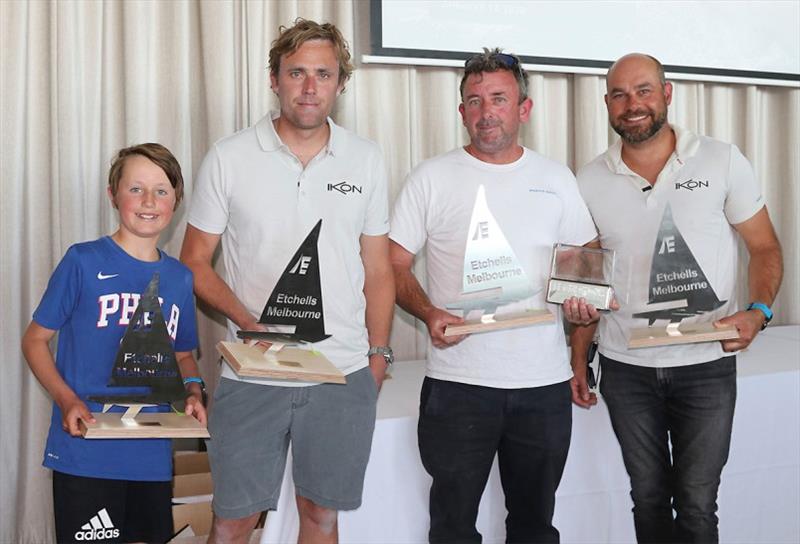