The car is well kept and well maintained. The car can be used and driven.

Where is HOTCHKISS J.A.G. GREGOIRE CABRIOLET BY HENRI CHAPRON 1953 for Sale? phuket 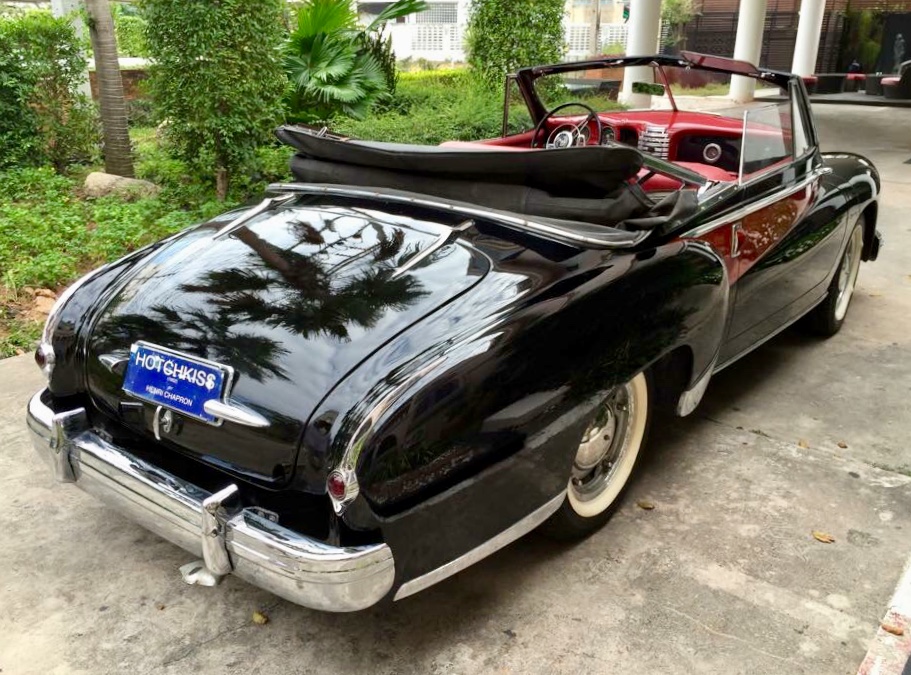 3 speed Manual transmission. Black and red colour with red leather.
Original soft top.
History And Performance: This Hotchkiss is in good shape and good body a mould from the original ones.

This Hotchkiss got a body restoration 7 years ago with very little use since then.

It is in very good original condition with original engine and gearbox.

This Hotchkiss is one of the left hand drive from the Hotchkiss factory.

In this Hotchkiss some parts are new part But most of them are original part of the Hotchkiss factory.

One of the most compelling symbols HOTCHKISS J.A.G.
GREGOIRE CABRIOLET BY HENRI CHAPRON 1953 classic sports car of the collector HOTCHKISS is a car made in France.

Produced by high quality, expensive, relatively rare. And limited Currently, this car is no longer manufactured.

This car used to race in the racecourse at MONTE CARLO.
And the victory was outstanding at the aluminum chassis.

Sporting a grille and a radiator made of genuine silver.
Hotchkiss was a French car manufacturer in the time between 1903 and 1955.

In 1948 Hotchkiss bought the rights to produce the Gregoire, a luxury saloon car designed by Jean-Albert Grégoire (the clue to the letters "J.A.G." in the model name).
The car was extremely modern for its time, having front-wheel-drive and a lightweight aluminium body.

With its low weight and streamlined body the car achived a remarkable victory at the 1949 and 1950 Monte Carlo Rally.

At Paris Motor Show in 1953 a special cabriolet version was shown, coach-built by Henri Chapron.

This cabriolet version is ultra rare as only 7 of them were produced.

This was the only one imported to Thailand.
This Hotchkiss has the a good history.

Thai royal family purchased from France in 1953 and sent to Thailand in the same year.

According to the detail and history of the car.

This Hotchkiss belong to former Royal family of Thailand.


Original in storage from French.
Shipped to Thailand later in 1953.

The car is registered at the transport office in Bangkok Thailand.

Original registration document is ready to transfer on the current date with all correct.


The HOTCHKISS is ready and have all papers to can be exported.

The car is well kept and well maintained.

The car can be used and driven.

This beautiful Hotchkiss Cabriolet is available for viewing at the Bangkok Thailand.


Hotchkiss is one of the long lost aristocratic French manufacturers.

The JAG Gregoire was their attempt to join the modern post-war world.

There's a certain family similarity to Panhard and and later Citroen models, with a 2,180 cm³ and 75 hp front drive flat four.

But production ran to only 247, including this Chapron bodied example, the only one to be brought into Thailand.

Forced merger with Delahaye signalled the end of JAG production and the company itself lasted only another two years before becoming a builder of Jeeps under licence.

Their Coventry side of things was bought up at the beginning of Morris MG.

Hence some of the weird 'foreign' threads used.
Gregoire was Amilcar's designer.

He came on bord when Hotchkiss merged with it."